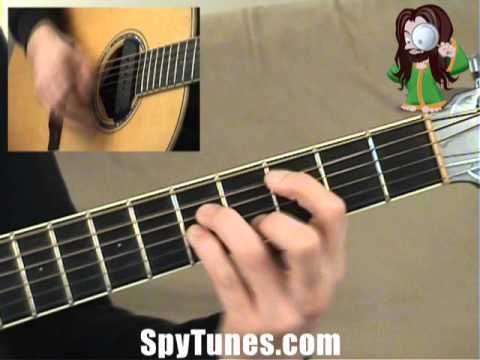 You can learn how to play Beautiful by Christina Aguilera!

Beautiful is a single, written by Linda Perry but sung by Christina Aguilera.

Originally performed on the piano, it would have been tempting to use a capo when arranging it for one acoustic guitar since the song uses chords like Eb, Ab and Fm.

Instead, for Beautiful we use only barre chords throughout which does make it difficult for the fretting hand.

Some relief happens over the Eb chord which is in a C shape and can use the open G string. This doesn’t give the chord any strange extensions as it’s just the 3rd of the chord.

In the video lesson, you’ll see how to play all chords for Beautiful from beginning to end.

The chords could be seen as if played in either the key of Eb or Ab.

Depending on which you choose, the roman numerals will be different.

Once translated to letters, this is what the chords become for the intro/verse/instrumental/m8 and outro sections:

These are the chords for the chorus.

It’s tricky to fret chords in keys such as Eb and Ab when you don’t play with a capo. All chords will have to be barre chords.

To get some relief, I use a C shaped Eb chord. Because the chord Eb has a G inside it, we can use the open G string. I also add the little finger on string 1. This adds a 5th to the top of chord shape.

For the B chord, I use the open B string. Since it’s played in an A shape we lose the ability to make it a minor or major chord. It becomes just a 5 chord (a chord with no 3rd).

During the M8, a new shape is introduced for the B chord. This time it’s in an E shape. We still use the open B but now have a 3rd on the third string. The open E string makes this B chord a Badd4.

Every day is so wonderful
Then suddenly it’s hard to breathe
Now and then I get insecure
From all the pain, I’m so ashamed

Possibly her biggest hit, Beautiful, was written and produced by Linda Perry.