A music lesson – In a novel!

I admit it, I used to be very into jazz and fusion improvisation when I was in my late teens.

I see a lot of students go through the same emotions. It’s as if they want to prove to the world that they are good musicians in every bar they play. I’ve been there, I get it.

The older I got, the less I play in every bar. I’ve come to appreciate space more than notes, I personally feel as if I’ve grown since my days of frenetic Lydian Dominant improvisations.

To me, the genre of jazz fusion has come to be represented by Mike Stern, Scott Henderson on guitar and Victor Wooten on bass.

As time moved on I became more interested in songwriting, bands and popular culture than Jazz/Fusion improvisation so admittedly I don’t really listen to or play this type of music on a daily basis anymore.

So when my old band mate Will Rendle recommended a book by Victor Wooten I was surprised, to say the least. Will is everything but Jazz!

Victor Wooten is mainly famous for playing Amazing Grace using only harmonics, check out the video above. 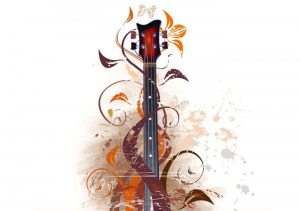 If Victor Wooten writes a book called The Music Lesson then that should be pretty advanced stuff right?!? It is, but it’s not about arpeggio substitution, it’s all about how to look at music as a musician in general.

Written as a novel, a mysterious man called Michael appears in Victor’s house one day exclaiming he is his new teacher who can teach him nothing!

I have never ever read anything like it, and I can’t recommend it enough to you.

now on Amazon, there is no way you will regret it!

As for me, I’m digging up those jazz records again, I love that stuff!