Coming to you, on a dusty road
Good loving, I got a truckload
And when you get it, you got something
Don’t worry, ’cause I’m coming

Got what I got, the hard way
And I make it better, each and every day
So honey, no don’t you fret
‘Cause you ain’t seen-a, nothing yet

I was brought up, on a side street, yes mam!
I learned how to love, before I could eat
I was educated, at Woodstock
When I start loving, oh I can’t stop 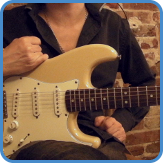 Today we start working on Soul Man by Sam & Dave. This song is, unlike many songs in this course, built around a driving and repetitive guitar riff.

The man behind the guitar part is Steve Cropper, a legendary soul guitarist who was a member of Booker T. & the M.G.’s. 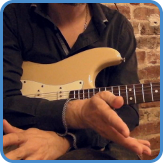 One bar long, that’s all. Sounds easy, doesn’t it?

Let’s spend half an hour on this one bar of music by digging deep into all its detail. 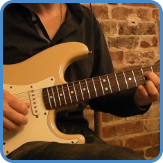 This lesson is all about the D shape. We’re first going to practice it in three different ways using the cycle of 4th.

This will manifest the D shape all over the fret board and if you haven’t achieved this already, it will teach you all the notes on the B string as well. 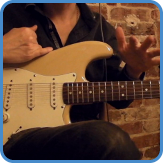 In this step, we work on the intro and chorus. They may look very similar at first glance, but there are actually key differences in there.

Saying this, it’s not that much to learn so we also play the verse and chorus on loop. 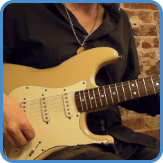 In this M8 lesson, even though there is a great part to just learn as it is, I would like to encourage you to try different chord shapes for this section.

This is in contrast to the otherwise strict note for note approach this song seemingly craves. 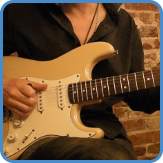 We have arrived at the end of the song and it’s time to change key. It’s similar to the intro, although a semitone up.

If you want to play it note for note, there are some details that are new. We also look at the super simple but clever outro part. 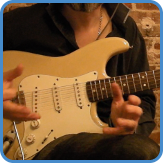 In this lesson, I play the full version of Soul Man in the original key of G.

My aim has been to stay as close to Steve Cropper’s original as possible. 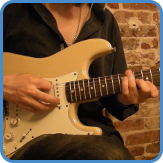 Ok, so now it’s your turn. You already have the TAB, you’ve played along with me, now you’re on your own.

Well, you still have the band to play with! 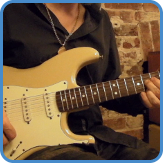 Soul Man is a song first recorded and performed by Sam & Dave. The band behind them was the legendary Booker T and The M.G.’s. 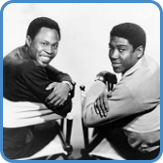 Sam & Dave are a Soul duo that made their most successful recordings with Stax house band Booker T and The M.G.’s.

Two years before they would eventually part ways, The Blues Brothers were released in the cinema, the film gave their career one final boost. However, neither Sam or Dave seemed happy about it.