Son Of A Preacher Man – Verse

The progression moves from chord I to chord IV and then back again. The use of the 6 over the E chord, hints the 3rd of the A.

Here’s a loop to practice the first verse along to. Use this after you nailed it to the TAB loops in the playlist above.

And here’s the first TAB example. Learn it as written, but don’t be afraid to apply variations to it.

I do find it difficult to fret the first chord as this is a C shape. My natural instinct is to fret it like a D shape.

Should this be the case for you too, simply do that, then move to the A chord. When you go back, now fret it as a C shape.

Should you add more muted strums than just one, that’s OK, aim to sit in the groove with the band, that’s the most important aspect.

The B, or B7 in this example climbs from a G shape to an E shape, to a D shape. All are B7, apart from the first one.

Here’s the next example. 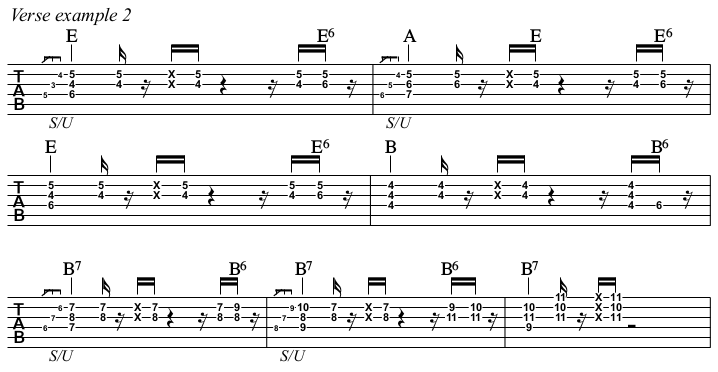 To me, this is a better way to play the verse than example 1. In my opinion, the part sounds better using string 2-4, rather than 1-3.

For the B7, which is still over four bars, we use these shapes.

Experiment with sliding into all shapes as well as none of them. Maybe you could even find a way to hammer-on, instead of sliding.

For the final example, you need a new loop, pause the previous loop, and start this new one before you dive into the TAB.

I’ve also squeezed in some licks here, mainly to prove that it is possible, although you’re treading a fine line here as you may piss off the singer, especially if you do it too much.

Varying your rhythm parts like this makes all the difference. To an extent, this is a feel thing, you may have to play three strings at the same time at first. Once you know the part, start aiming for only two strings.

The B or B7 (chord V) is now only three bars long and I’m using an E shape, an E7 shape, and a G7 shape. Experiment with finding other shapes.

Spend around 10 minutes on each example. Play both as written as well as come up with some variations.

Next time, we look at the chorus, which is similar to the verse. If you didn’t nail it today, by moving on and learning the chorus, what you play for the verse will soon improve as well.

See you in the next step!