This song uses a 16th note strumming pattern at a slow tempo, we’ll look at the strumming next time.

Today we focus on the chords and progressions of each section.

For example, chord III has been modified into a major chord to create some tension in the pre-chorus and m8.

To get to know the chords and the progressions I’ve simplified the strumming patterns, there are TAB loops available for all examples in the playlist above.

Here’s the TAB for the Intro/Verse progression. Really simple stuff here, remember to mute the chord on the 4+ beat.

Here’s the pre chorus, it’s even easier! This time, the only difficult part here is to mute the chord on beat 4. Aim for perfection. The rest should be as clearly pronounced as a strum!

Let’s move on to the chorus. The difficult bit is to mute the chord on beat 4+ but since you’re good at that after practicing the verse and pre chorus, it’ll be easy.

Also, the F/C sounds best if you play two strings on beat 1. This takes some practice to get right, use the TAB loop!

Lastly, let’s work our way through the chord progression of the M8.

I’m sure that the only problem you could come up against here is how to fret the falling bass line over the Am. Try it using both your thumb as well as refretting it as I describe in the video lesson. 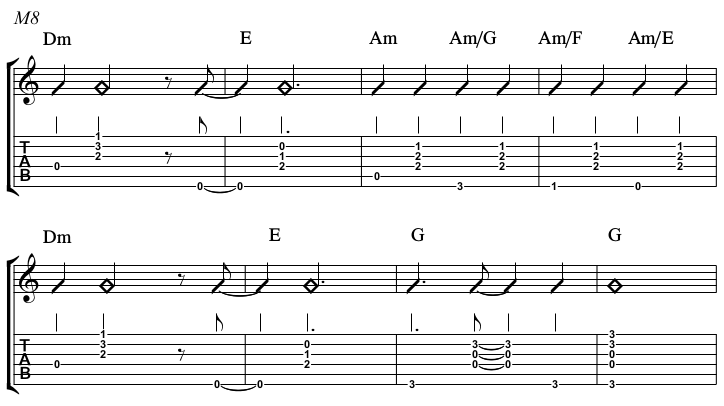 Next time, we practice some tricky 16th note strumming, it’ll be a good idea as the strumming pattern for Rewind is pretty complicated.

Saying that, it’l be a lot easier now that you know all the chords and progressions of the song.

See you in the next step!