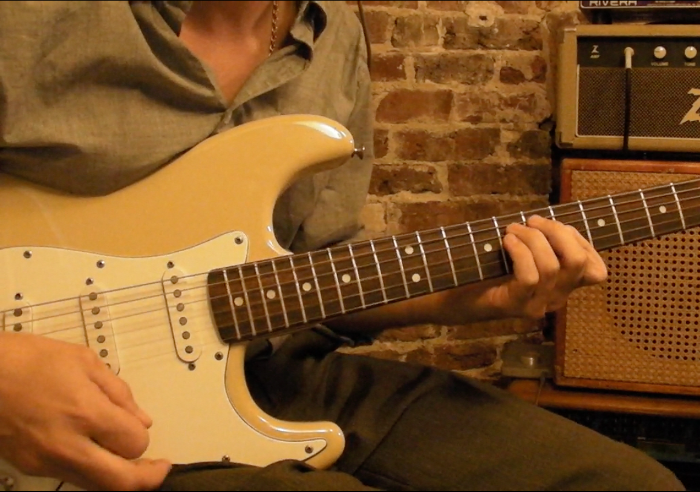 You can learn how to play Jimmy Mack by Martha and The Vandellas!

Jimmy Mack has been included in the intermediate electric guitar course because it’s a great example of a song that can do with having its chords extended, or even better – substituted!

Let’s take a quick look at how this concept works.

There are two ways to extend a chord. The first is the traditional way, which works like this: By picking every other note from a scale we get a chord. Keep doing this and your chord becomes bigger.

For example, to achieve a Dbmaj7, instead of Db, you look for the next “every other note” in the scale and include it, now you have a maj7 chord. Next up would be a maj9 chord, etc.

Due to the intervals of the scale, the chords available become Db, Dbmaj7, Dbmaj9, Dbmaj11 and Dbmaj13.

The problem with this way of constructing chords is that we get too many notes to fit them all on the guitar. Few guitar parts sound good with more than three strings!

A solution to this dilemma is to substitute. Instead of building up the scale using “every other note”, we move to the next “every other triad”.

These are the triads of Db major:

As long as you know what key you are in, and all the roman numerals available, you can extend your chords in this way.

When you play Jimmy Mack, you should experiment with different triads to substitute and by doing so extend the harmony. When you get good at this, you can do it in an improvised way.

When you substitute chords in an improvised way, you’re essentially playing jazz. Jimmy Mack is a great song to start experimenting with this concept.

The chord progression of Jimmy Mack is played in the key of Db. There is plenty of room to extend and substitute these chords.

Here are the bare bones of the chord progression.

You can learn how to play Jimmy Mack by Martha and The Vandellas!

Lamont Dozier and brother Eddie and Brian Holland was Motown’s main songwriting team in Motown’s hit factory during the 60s.

Martha and the Vandellas – Biography

Martha met her Vandellas as she was a secretary at Motown’s hit factory where her soon to be backing singers sang for Marvin Gaye.

Together they had seven years of hits including Jimmy Mack, Nowhere To Run, and perhaps Motown’s biggest hit of them all in Dancing In The Street.

Go to Martha and the Vandellas – Biography.