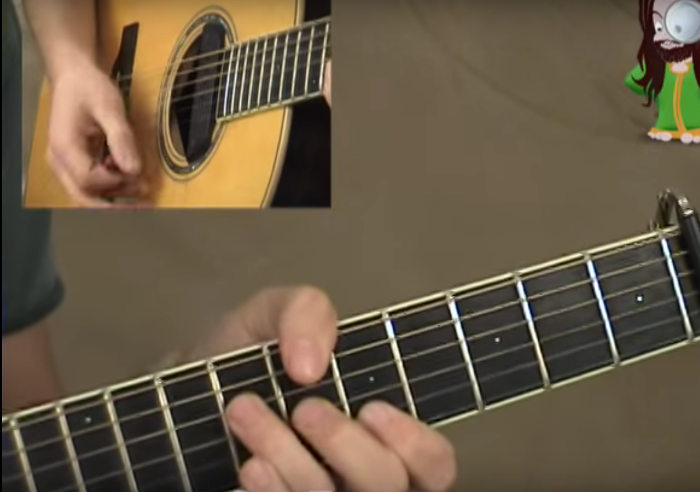 You can learn how to play I’m Yours by Jason Mraz!

I’m Yours is a single by Jason Mraz, officially recorded for the 2008 album We Sing, We Dance, We Steal Things, it became a huge hit.

My one guitar version was actually recorded before Mraz officially released it. I based it on an early live version.

I’m Yours is in the (for guitar) unusual key of B. I’ve placed a capo on fret 2 to have the open A and E chords at hand. However, they only appear occasionally as most of the song is played using barre chords, further up the neck.

We cover the arrangement in detail in the course.

If you don’t use a capo, the chord progression for the verse/chorus section is simple with its I – V – VI – IV progression.

A few licks are incorporated in the arrangement. These could be seen as chord extensions.

The chord progression only changes once and that is for the m8 section.

In I’m Yours, you don’t play full barre chord shapes. Only fractions of the full shapes are used over no more than three strings at a time.

As we’re in the key of B, this can be difficult to visualize on the fret board at first.

Most great guitar parts only use fractions of a barre chord shape like this so it would be a great idea to practice the chord progression all over the neck in order to find out which shapes sound best to you.

When you take the intermediate course, you’ll do just this as you play along with me and the singer to discover your best 2nd guitar part. Once you have, we can play I’m Yours together.

You can learn how to play I’m Yours by Jason Mraz!

Well you done, done me and you bet I felt it,
I tried to be chill but you’re so hot that I melted.
I fell right through the cracks,
and now I’m trying to get back.

Mraz’s second album was released in 2005. He promoted it by touring with Alanis Morrisette, Tracy Chapman, and James Blunt the world over.

It was as if the stage was set for Jason to finally release the smash hit everyone knew he’d already written.

You can learn how to play these 16 intermediate acoustic songs!

A Change Is Gonna Come, American Pie, Angie, Babylon, Blowin’ In The Wind, Dreadlock Holiday, Fast Car, Hey There Delilah, I Can’t Stand The Rain, I’m Yours, Kiss Me, Mad World, Red, Starman, Sunny Afternoon, and Whistle For The Choir.