What happened to the Guitar Conspiracy and all other eBooks?

Back in 2007, when Spytunes first launched, I sold an eBook that explained the chords, chord progressions, arpeggios, pentatonic and modal concepts of Spytunes. It was called the Guitar Conspiracy. 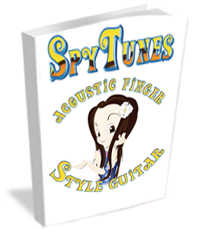 Along with the Guitar Conspiracy, came the Work Book which included the TABs for all of the chord progressions, arpeggios and modal exercises. The first hundred copies were printed and they sold out immediately. Some people just wanted the PDF so I offered that as well, at a lower cost.

It quickly became apparent that once printed, I had limited myself. I couldn’t add any new songs or exercises. Since the whole concept of teaching guitar online was to remove excuses such as time and location, it made sense to stop the hard copy version and go completely digital.

This led me to produce a number of eBooks over the next five years. I included free updates as I developed them. At the time, it made sense to pursue this and I enjoyed the challenge.

One of these eBooks, Acoustic Finger Style Guitar, had finger style exercises and a practice version of each song.

Another eBook, Rhythm Guitar, had two different concepts. The first concept was to say rhythms using syllables, then play them. The second concept was a practice version of each song, a simplified loop if you like.

I also wrote an eBook called Music Theory which taught you how to read and write music on the stave. 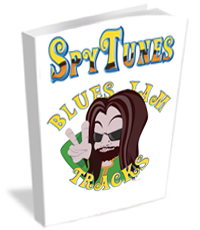 To help the student learn how to improvise, I offered two eBooks with hundreds of backing tracks.

The first was called Blues Jam Tracks and it contained two hundred backing tracks. There were also videos moving licks from one shape to another and lots of ideas to help the student get going. These used the concept of “new chord = new scale”.

The second eBook, 2 Chord Loops, used a similar concept to the Blues Jam Tracks but with different chords and a focus on more modal scales.

By now, I had written so many eBooks I decided to package them into a bunch of offers. The most popular offer was The Spy Tunes Method which was – yes you guessed it – all eBooks!

As a result of all of this work, I had a few ecstatic students. I mean, all eBooks for $79 is a pretty good deal! All the answers were there but it was starting to become a case of “Good luck, now you’re on your own!”. Those students who were not ecstatic were becoming frustrated as although they now had a lot of eBooks, they were unsure where to actually start.

This was not at all what I had intended and I needed to find a better solution.

The answer came from one of my students who suggested that I change my eBook approach into simple step by step instructions so that he didn’t have to plan his learning for himself.

With my previous experience of writing step by step instructions (for guitar magazines, music colleges and, more recently, an online college in America) I realized that he was right. The simple step by step idea was definitely the way forward!

The beginner guitar course was created from the Beginner elements of the eBooks, along with all of the exercises and acoustic songs from the beginner section on site. It was launched in 2012 and took me six months to write. This course was immediately successful and made me realize that the eBooks would soon be obsolete.

I started to wonder how long the entire advanced course might take, bearing in mind there would be so many more songs and exercises involved. However, I put this to the back of my mind and set about writing the intermediate guitar course. It took me an entire year to write and was launched the following year. The response was equally as good for this course.

In February 2014, I started working on the advanced guitar course. I spent over two years planning and writing this course and also the master course.

All of the original information in the Guitar Conspiracy, all the other eBooks, and how I could improve on that material, were all considered and tweaked based on feedback from my test group. As a result, my original eBooks really were becoming a thing of the past.

The step by step method had won me and my students over completely, so much so that in 2015 I pulled the plug on all eBooks. Instead, I have since offered step by step courses only.