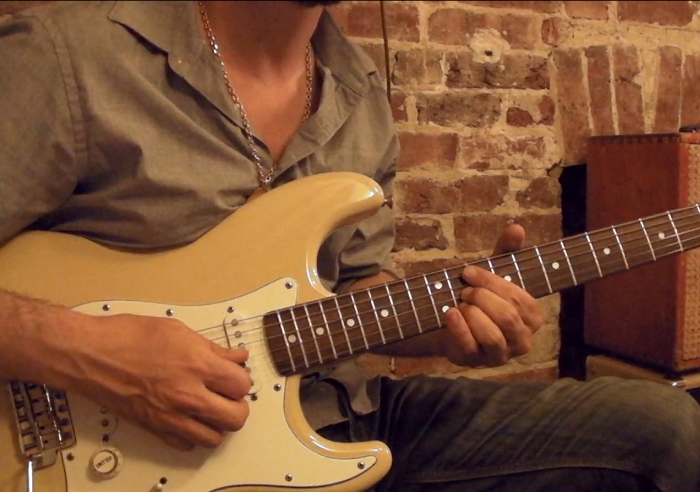 You can learn how to play Get Ready by The Temptations!

Get Ready is a song by The Temptations, it was originally written for a dance craze, think a 60s version of the Macarena!

Since the original release in 1966, many well know artists have covered it, plenty of TV ads have been synced with the song and few Motown/Soul bands leave this one off the set list.

Motown actually had a second hit with the song for their band Rare Earth in 1970.

The verse is really just a riff using the D Minor Pentatonic scale.

Should you want to add actual chords, they would be D, G, and F. Not Dm and Gm!

First, you should play through all shapes for these chords so you don’t limit yourself to anywhere on the fret board.

In the intermediate electric guitar course, I’ll give you all the TAB you need for this and even live band loops to practice too. Finally, I’ll show you how to create and develop your own parts for the chorus.

The solo is a written part, starting with sax and then followed by a fast string line.

Instead of improvising a solo, I decided to work out what the sax and strings actually did, then find a way to play that on the guitar.

The sax uses a glissando technique, which is impossible to perfectly emulate, but using fast pull-offs, we can get close.

The strings are fast legato lines using 16th notes played over three note per strings. This can be difficult as it’s easy to slip into playing triplets.

Because these are two unusual techniques, I wrote exercises for them that when practiced slowly will get you to a point where you can play this at tempo.

Learning to play solos by other instruments than the guitar is a great way to widen your horizons.

In the video above, starting at 2:43, you find a preview of Get Ready’s guitar lesson, it’s the beginning of step 2 from the course.

In this step, we work on the main riff and how we can play it in different areas of the neck as well as vary the riff. There’s TAB available below showing you all five examples.

In the course, you get a loop to play along with the band, first, you must practice each example in isolation, then start moving freely around the fret board.

To get access to the loop and all other lessons you need in order to learn how to play Get Ready, sign up here.

To get the most from playing Get Ready, we move that verse riff around the fret board and vary it in execution.

For the solo, we copy what the strings and the sax play on the original recording.

Go to Get Ready – Guitar Lessons.

Go to Get Ready – Lyrics.

Before this, she pioneered scat-singing in the 40s as a devoted Bebop singer.

Robinson’s hits include Shop Around, You’ve Really Got a Hold on Me, The Tears of a Clown, My Guy, My Girl, and Get Ready.

The Temptations are a five-piece vocal group that has been active since 1960. After the original five members, another nineteen singers have come and gone.

Early hits like My Girl were produced by Smokey Robinson, later they ventured into a more psychedelic soul sound with Papa Was A Rolling Stone.

Go to The Temptations – Biography.

You can learn how to play these 13 intermediate electric songs!