Fender might have become most known for their guitar and bass models such as the Telecaster, the Stratocaster, and the Precision but Leo actually started out repairing amps.

Leo soon thought he could improve the design of the instrument amplifiers and make a larger profit doing this than just repairing them.

He teamed up with Doc Kauffman and got to work. 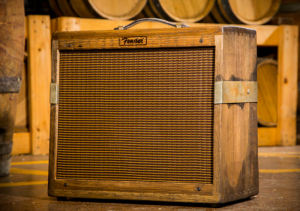 One of the first commercially successful amps Fender ever made was the Champ. A single ended class A 5W amp with a very simple design. It became hugely popular almost instantly when it was launched in 1948.

The Champ has changed many times since then using 8″ and 6″ speakers, different schematics, valves, and covers.
These days the custom shop still keep churning out variations on the theme.

The Fender Pro Junior is possibly the closest you can get to what the Fender Champ was intended for, a low wattage, recording amp.

The concept certainly worked for Jimi Page on his solo in Stairway To Heaven which was recorded on a Champ.

If any amp can be considered to have changed the world it is the Fender Bassman.

Leo built this to go with his new innovation, the precision bass, the world’s first electric bass with frets. Complete with its own amp it pretty much single-handedly paved the way for the modern rock combo.

Not only bass players favored the Bassman, but guitar players also used it as well.

These amps were very well made and once they started to export and Jim Marshall got hold of them he got together with Pete Townsend and Eric Clapton to develop the Marshall JTM45, using the Bassman as their starting point.

Today Bassman’s might not be as popular but the amount of spin-offs built on this original model is crazy!

The Fender Twin has a so-called AB design. Valves (class A) are used for preamp, reverb, tremolo and power amp. The rectifier is solid state (class B).

The Twin is known for its ability to be very loud and still remain clean as well as its lush sounding reverb.

Over the years, the Twin has seen many modifications, both internally (speakers, wiring, valves) and externally (covering, buttons etc).

One thing that always remained was that a Twin comes with tilt back legs, allowing you to angle the amp up towards your ears rather than legs.

Known for being heavy to lug around but very reliable for a valve amp, the Twin has had millions of working guitar players attached to her.

Pedal friendly as she is, the Twin loves a bit of delay and some light overdrive from pedals such as the Tube Screamer. Tremolo and Reverb are of course built in.

Fender teamed up with IK Multimedia to digitally build replicas of their amps. The result was Amplitube Fender which when used with AmpliTube other products inside X-Gear gives you a serious combination of amp history, as a simple plug-in.

In the physical world, the Cybertwin was Fender’s move on the digital amp market.

They started this seriously complicated project in 2001 with a digital amp that had all real routing set up and wired, using a digital interface to control the signal. No other company has attempted to build a digital amp in the same way.

A nice hint of Fender’s enormous legacy is the Cybertwin’s preset, Her Majesty’s Bassman. This refers to the JMP45, Marshall’s first amp.

In 2020, a new line of digital amps have been released. Entitled Tone Master, they look and feel “exactly like the real thing until you lift them”. Only one way to find out…

Eddie Van Halen has always been modifying his guitars and amps. While doing so he’s gone through many different brands such as Music man, Peavey, Charvel and Marshall. Now, finally, Eddie has teamed up with Fender for his take on the ultimate amp.

Classic Van Halen riffs will obviously sound awesome, but it’s also clear how great Eddie’s sound is for any kind of rock guitar.

With three independent channels and very quite switching between them, you can build a sound that seamlessly moves from clean to distortion.

Combine this with volume control on the guitar and you might be able to put the pedal board on eBay. Sounds tempting? It should. As history teaches us, the best amps have always been developed by players.

Or maybe the new Eric Clapton series of amps is what’s perfect for you. I’ve tried them, they are very fabulous indeed.