No other band has stayed together longer

The Rolling Stones are an English band whose RnB and rock & roll infused music became popular during the so-called British Invasion in the early 60s.

Incredibly, the band has stuck together ever since and they still tour and record together.

Although they were around at the same time as The Beatles, Led Zeppelin, Cream and The Kinks. The Rolling Stones have outlived of these other bands, living up to the English rock and roll lifestyle.

Approaching sixty years as a band, The Rolling Stones have gathered a catalogue of hits such as Start Me Up, Satisfaction, Wild Horses, Angie, Jumpin’ Jack Flash, and Honky Tonk Women.

Angie is a single by The Rolling Stones, from their 1973 album Goats Head Soup.

Not the most obvious Rolling Stones track, Angie is one of those tracks that everybody knows without knowing it! This makes it an excellent choice for the set-list.

Reaching #1 in America and #5 in the UK, Angie was the biggest success of the Goats Head Soup album.

So, who is Angie? Some say Angie is a reference to Mick Jagger’s affair with David Bowie‘s girlfriend Angela but Mick has denied this on several occasions.

Mick instead refers to Keith, who actually wrote the song. Keith says he can clearly remember that it had something to do with his daughter who’s named Angela.

Many children of the 70s have been named after this classic Rolling Stones ballad. 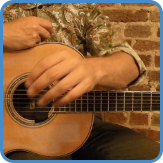 In the first step of how to play Angie, we look at how to strum the verse and chorus.

Use the TAB loops to practice each section individually. 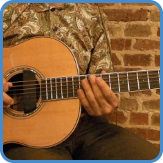 In this step, we learn the M8 and Intro. The M8 has two examples to practice along to the loop but you could make up your own as well.

The intro should be played exactly like the original recording as it is more of a composed part. 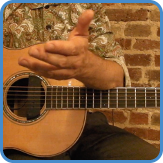 Let’s play the complete song from beginning to end.

Use the video of me and the singer to play along with. There is also a chart to follow. 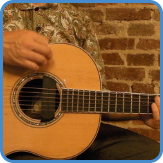 As you already know how to play the song now, let’s start learning from the song.

First up, let’s learn the vocal melody and the scale upon which it is built. 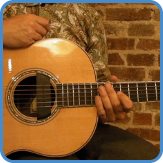 More A Minor Pentatonic shapes in this step as we learn the Dm and Cm shape as well as repeat the Am shape at fret 12.

Of course, we also look at how the verse and chorus melody use it as we play in all shapes. 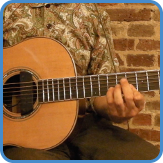 Let’s work out a 2nd guitar part for the verse of Angie. As one guitar is already playing big chords, this part can be more free, even improvised.

Before you let go and improvise, start by learning the TAB, focusing on how the A Minor Pentatonic is used. 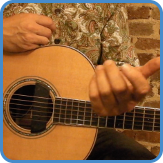 In this step, let’s do to the chorus what we just did to the verse.

Use these ideas as your starting point before developing them yourself. If you can’t come up with anything, move these ideas to other shapes. 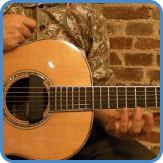 In this final step, we play together as if we were a band.

Make it sound nice by playing melodies in between vocal lines and chords in different shapes to me. 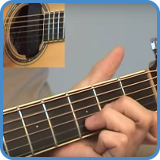 Angie’s chord progression constantly strives to go back to Am, which is chord VI. This makes the song in the key of Am. 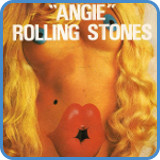