The Kinks were part of the British Invasion

The Kinks were an English pop/rock group formed in ’63.

Categorised as a British Invasion band, along with the other members of the so-called Big Four (The Beatles, The Rolling Stones and The Who), they changed popular music forever.

Among their hits you can find Lola, Sunny Afternoon and You Really Got Me which, fourteen years later, would be covered by Van Halen, using a much louder amp.

Sunny Afternoon first appeared on the ’66 album Face To Face and later as a single from that album. Finally, it appeared as the title track of their ’67 compilation album.

It wasn’t just The Rolling Stones, The Who and The Beatles who went to America with their blues, soul and rock n roll infused pop. The Kinks were also a part of the phenomenon along with The Searchers, The Yardbirds, The Animals and The Hollies.

None of the bands might have achieved the same craze as The Beatles did, but the communal effort has bound British pop and rock with American popular music culture ever since.

The British invasion of blues guitar-influenced pop brought artists like Muddy Waters, B.B. and Albert King to fame in America and the world over.

It also changed American music into a much more raw art form and made the electric guitar the most popular instrument in the world.

Many popular culture historians would argue that this ultimately came down to the Big Four as well as these two individuals: Eric Clapton and Jimi Hendrix. 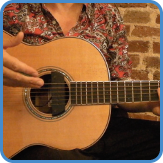 Before we start exploring how to play Sunny Afternoon I want you to gain a firm understanding of the triplet feel.

To achieve this we play the sweeping exercise using 12/8, shuffle, and swing rhythms. 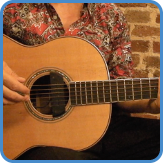 In this step, we learn to play the intro/chorus tag. It uses a swing feel and presents several challenges.

Not only is it difficult to fret the descending bassline, but there’s also plenty of muting going on as well. 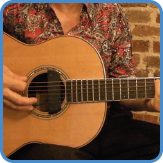 In this step, we learn how to play the verse. This is much, much easier to achieve than playing that intro you did in the last step.

There’s also plenty of songwriting tricks here to learn from if you’d like to write hits yourself. 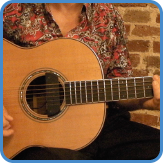 In this step, we play the chorus. This section is possibly the easiest of all three you need to play the complete song.

Practice along to the loop aiming to get it exactly as the TAB display before you start coming up with variations. 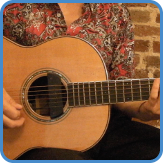 It’s time to play the complete song. Hopefully, that intro/chorus tag is by now not too difficult.

Use the chart to guide you as you play along with me and the singer. 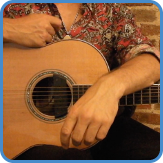 Let’s develop a 2nd guitar part for the intro/chorus tag and verse.

We do this by removing the capo and play as if in the key of Dm. 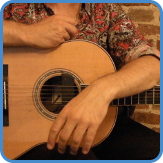 In this step, we work out how to play a 2nd guitar part for the chorus.

We try both big open position chords to support the first guitar as well as small compact jazz style comping. You’ll gain lots from practicing this. 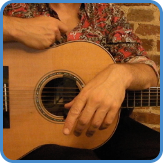 In this final step, you join me and the singer(s) again.

As we’re a band now, maybe it’s time to fire up that tour bus and book us some gigs! 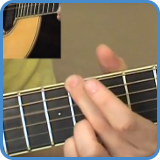 Sunny Afternoon’s bass line create a looped pattern for the intro/chorus tag in a minor key. When the chorus starts, the same major key is applied.

Going from minor to major like this is one of the best tricks to apply when you want to create a feeling of release in a song. 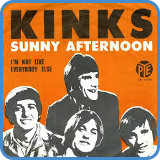