The most successful band in the history of popular music

The Beatles are the most commercially successful and critically acclaimed band in the history of popular music. Estimated by EMI, The Beatles have sold over one billion discs and tapes worldwide.

The Beatles were the leaders of the so-called British Invasion. With their catchy rock n roll infused pop, they took America by storm, creating hysteria everywhere they went.

On the 29th of August, 1966, The Beatles played their last live show. It was held at the Candlestick Park in San Fransisco, U.S. Performing with only a Vox AC30 each, it has famously become a landmark. The saying goes that modern touring was invented fifteen minutes after this show.

Among The Beatles hits you’ll find A Hard Days Night, She Loves You, Help, Let It Be, Blackbird, A Day In The Life, Michelle, Live And Let Die, Eleanor Rigby, Hey Jude, Don’t Let Me Down and Strawberry Fields.

Blackbird was written by Paul McCartney after he was woken up by a bird at six o’clock in the morning, in India.

Released on The White Album (used as slang, it was simply called The Beatles, printed on a white cover), in 1968, it instantly became yet another classic to add to The Beatles immense hit parade.

Following the legendary St Peppers Lonely Hearts Club Band a year earlier, the days when John Lennon claimed The Beatles to be “bigger than Jesus” were long gone.

The Beatles had gone from being the first boy band ever to be the most respected act in the industry.

The White Album sold a staggering nineteen times platinum in the U.S alone and charted at #1 in six countries.

Beatles responded by making fun of everything. For example, they would give journalists different answers to the same question, constantly pushing the boundaries of what they would print.

Today, these stories have managed to get into such serious environments as Wikipedia.

According to Wikipedia, Blackbird is quoted to be a song that Paul wrote whilst in Scotland. Seeing racial tension escalate in America, he sang “blackbird fly”, referring to the idea that black women should get out of there.

Lennon would have been in stitches if he knew! 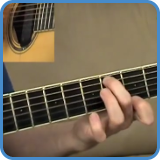 Inspired by Bachs’ Bouree in E minor, Paul McCartney created a modern masterpiece that all other acoustic finger-picked songs shall forever be compared to.

An open G string is used almost throughout Blackbird. This ties the very clever chord progression together nicely. 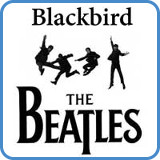 Blackbird singing in the dead of night
Take these broken wings and learn to fly
All your life.
You were only waiting for this moment to arise