Stevie Wonder is the legend whom most practicing musicians come across that has a life-changing impact on them.

Stevie’s natural groove and ability to so purely express music remains untouched. His vocal phrasing is second to none.

His super-hits include Sir Duke, I Wish, Master Blaster, Lately, Superstition, and I Just Called To Say I Love You.

Stevie is so much in a class of his own, it’s almost as if he understands and can express music in a different way to the rest of us.

As I over the years have learned many Stevie Wonder songs I have studied his chord progressions. Most of them are very unique, Stevie does stuff with his progressions that no one else does. Remarkable.

And I haven’t even mentioned his keyboard or harmonica playing, which is both unique and outstanding as well!

What about the vocal range, melody writing, and lyrics? Well, Stevie is easily one of the most accomplished here as well.

If you haven’t already you should immediately go and listen to his entire back catalog. It contains some of the finest music ever written, and performed! 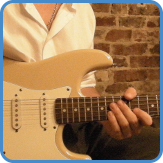 This is probably my favorite song to play as it literally encourages me to improvise, or as the title suggests, Jammin’. 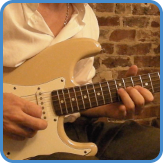 What’s so interesting with the verse progression is that we can’t exactly define what the Roman Numerals are.

The chords are several things at the same time. It’s a master class in how to write a great chord progression if you like. 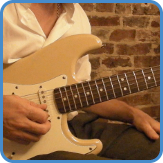 Today we play the chorus. This is a simpler progression than the verse, similar to what you played in I Heard It Through The Grapevine, although now in a different key.

When you can play all examples – start improvising. 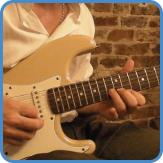 In this step, we practice the Minor Pentatonic again, in sequences. This is a great test to see if you have learned the scale properly. 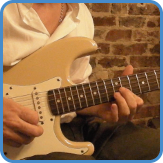 Today we learn those scary instrumental sections, in (almost) all areas of the neck.

Plenty of shapes to get through and as if that wasn’t enough, I want you to practice all by picking the notes as well as hammering-on and pulling-off. 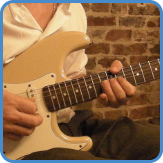 In this lesson, I’ll show you a scale I made up and named Conspirian.

After you learned it in five positions I also give you six licks that’ll work when you improvise a solo over either Master Blaster’s verse or chorus progressions. 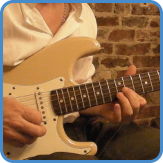 Today I’m gonna play this song from beginning to end, in an improvised way.

The improvisation part is down to what shapes I play when, but also how hard or soft I strum, and how much I take out from a part in order to create more space. 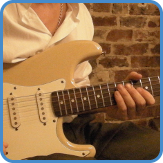 Keep this video on repeat as you jam along, exploring the fret board at the same time.

Today was the last time we studied how to play Master Blaster. It was also the last song of the course. But it wasn’t the last lesson in the course… 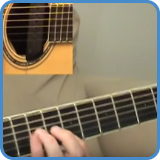 Originally in the key of Ebm, this song has been transposed up to Em in order to work better on just one acoustic guitar.

The bass line is very prominent in this song and must, therefore, be a big part of the one guitar arrangement.

Go to I Wish chords. 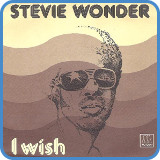 Go to I Wish lyrics. 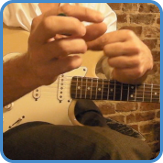 Master Blaster is a song released on the Motown label, but unusually played in a Reggae feel. Written by Stevie Wonder, it is a tribute to Bob Marley.

Often seen as a benchmark for musicians, the scary second instrumental section will probably take some extra work to get right. 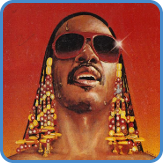 Everyone’s feeling pretty, it’s hotter than July
Though the world’s full of problems, they couldn’t touch us even if they tried
From the park, I hear rhythms, Marley’s hot on the box
Tonight there will be a party, on the corner at the end of the block