Plain White T’s are an American pop/rock band who had the most success with their song Hey There Delilah, charting at #1 in many countries in 2007.

Using a very persistent marketing technique, Hey There Delilah was pushed for over two years before it was finally #1.

In the end, Hey There Delilah ended up carrying the promotion of two albums on its shoulders. First, on the album All That We Needed, the re-released on Every Second Counts.

The latter recording had a string section added to the one guitar arrangement. It is this version that achieved daily radio play in most countries in the world for a few months in 2007.

When Hey There Delilah finally started to get international airplay, there was no stopping it. U.K radio stations had thousands of people calling in to ask about the song as it was played during the first half of 2007.

Building on the hype, it wasn’t released as a single until September, a whole year after Plain White T’s follow-up album! Slowly climbing the charts, it reached #1 in ten countries during 2007.

Nominated for Best Song and Best Vocal Performance at the 2008 Grammy awards, Hey There Delilah only lost out to Amy Winehouse and Maroon 5.

Time magazine decided that it should be at #7 on their list of songs of 2007. They added that the concept of – an aching guy reaching out to a distant girl – felt fresh. 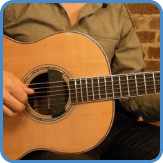 In this first step, we learn how to play the verse and chorus from Hey There Delilah, just like on the original recording.

Use the TAB loops to master these two relatively simple sections of the song.

Go to Hey There Delilah step 1. 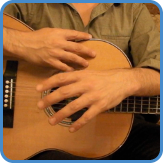 In this step, we focus on how to play the M8 section from Hey There Delilah.

You’ll soon find out how this is in many ways recycling the chords you already played in the verse and chorus.

Go to Hey There Delilah step 2. 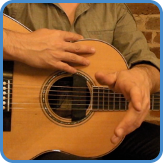 In this step, we learn how to play Hey There Delilah from beginning to end, just like the original recording.

Use the TAB and the video to play along with me and the singer.

Go to Hey There Delilah step 3. 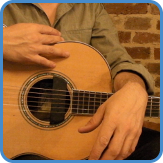 In this step, we look at how the CAGED system can help us discover 2nd guitar parts for Hey There Delilah.

The secret to unlocking the guitar fret board lies within linking the CAGED chord shapes up and down the fret board.

Go to Hey There Delilah step 4. 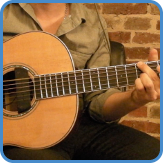 In this step, we work out a 2nd guitar part around fret 5. All chords are now barre chords.

However, as we only use three strings, there is not much barring going on!

Go to Hey There Delilah step 5. 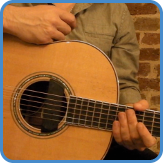 It’s time to move up the neck and find yet another 2nd guitar part, this time around fret 10.

Where will all this lead? To improvising and learning how to write parts, that’s where.

Go to Hey There Delilah step 6. 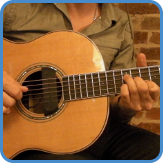 In this final step, I’ll show you how you can use the CAGED system to improvise up an endless amount of guitar parts.

Play along with me and the singer one final time, make up your own part as you go along.

Go to Hey There Delilah step 7. 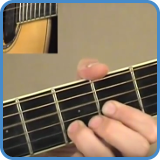 Being in the key of D and using a clever bass line, Hey There Delilah manages to take an extremely common chord progression and make it feel fresh.

Executed with a perfect balance between “heard it before” and “sounds new”, this song became a worldwide hit after being marketed over two albums.

Go to Hey There Delilah chords and guitar lessons. 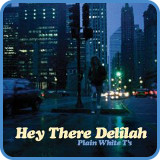 Hey there Delilah what’s it like in New York City
I’m a thousand miles away
But girl tonight you look so pretty, yes you do
Times Square can’t shine as bright as you, I swear it’s true

Go to Hey There Delilah lyrics.