It took Fontella 28 years to get paid

In 1965, Fontella Bass was the first female artist to sell over a million copies of her hit Rescue Me for the legendary label Chess. Only Chuck Berry had previously reached such figures for the label.

Chess was set in Chicago and a rival to Berry Gordy’s Motown label located in Detroit. Both labels competed for the white radio audience with Chess coming from a Blues recording background, Motown with its house band The Funk Brothers.

Naturally, Fontella was excited that her song, for which she had been assured she was going to be credited as writing, sold so many copies.

She was told by her manager not to worry about it, of course, she would be paid, eventually…

When eventually never happened, Fontella started complaining again to no use. After not being able to let go of her unfair treatment, she realized that she had gotten a reputation as a trouble maker.

Getting tired of the music business, Fontella moved with her husband to Paris in 1969 to pursue a recording career in Europe instead.

During the 70s and 80s, Bass had little chart success with the few albums she appeared on.

In 1993 she heard her song Rescue Me on a TV ad by American Express. This was clearly too much to take for her as she sued American Express and actually won, collecting $50.000.

It had taken her 28 years to get a paycheck for the song she wrote. 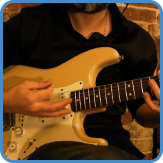 For bands playing other people’s songs, Rescue Me has become an easy classic to add to the Motown/Soul repertoire.

Before we look at how to play each section in detail, let’s have a listen to the complete song and study a Bars and Beats chart. 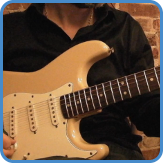 The chorus of Rescue Me mainly moves between the two chords A and D.

To develop a good guitar part for it, you must ensure you can play these two chords anywhere on the neck. Let’s practice with the band. 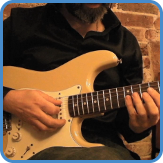 In this step, we learn two new chords all over the neck in G and Em.

Pair this with A and D and you have the complete progression for the verse of Rescue Me to play with the band on a loop. 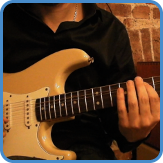 In this step, we take a look at the turnaround and how we can play it all over the neck, both as a single line and as chords.

To work out what chords we can play instead of just the melody, we must harmonize the A major scale. 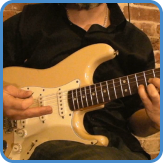 As the intro has notes from the Major Pentatonic, let’s learn the scale in all shapes and make sure we can play the intro all over the neck.

I’ve made five custom-made exercises for this, see them as an introduction to learning the Major Pentatonic. 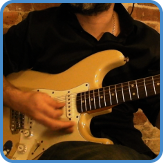 It’s time to put sections together, let’s play the verse, chorus, and turnaround one after another.

Remember this is still an exercise, keep exploring that fret board! 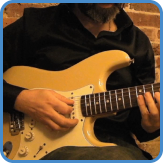 In this step, I play Rescue Me from beginning to end. Play along with me and the video, using both the same shapes as I do, as well as trying others.

And don’t forget to play the turnaround both as a melody, as well as chords. 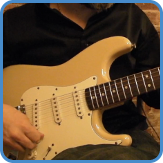 The final step is now for you to play the full song.

If you practiced well, you could do this in an improvised way, picking out different chord shapes as the song moves along. 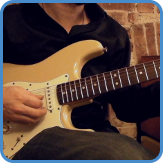 Rescue Me has a simple but very clever chord progression. Learn how to play it all over the neck and you’ll be able to improvise the rhythm part.

Improvising means to use pentatonic scales to build licks, slide into chords, add extra rhythms, as well as moving between chord shapes.

Go to Rescue Me chords and guitar lessons. 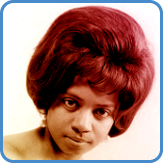 Rescue me, take me in your arms
Rescue me, I want your tender charm
‘Cause I’m a lonely and I’m blue
I need you and your love too

Go to Rescue Me lyrics.