David found his White Ladder in the end

David Gray is an English singer-songwriter who, after many years of struggling with unsuccessful releases on different labels, ended up recording the album White Ladder in his bedroom.

The single Babylon and his head shaking singing style made him world-famous. Since the release of White Ladder and the success that followed it, David Gray has toured the world and released several albums.

Prior to this homemade album, David had little success as an artist but never gave up. Even though he had been dropped by labels for almost a decade in various line-ups.

With only his drummer, Craig McClune helping him produce White Ladder from home, it went on to become a massive success with a total of eight singles released from it.

On the back of this success, David Gray ended up supporting Dave Matthew’s Band on tour around America. Matthew’s even released White Ladder on his own label.

At the time Gray started the recordings for White Ladder, he was seriously considering giving up his musical career.

Life on the road had finally got to him and depression had started to kick in. His relationship was on the rocks and he had no money left.

This is evident in the song Nightblindness where David sings “What are we gonna do when the money runs out, I wish there was something left to say”. He later spoke about finding it weird that people can relate to that kind of pain.

White Ladder earned David Gray a Grammy nomination for Album Of The Year in ’02. 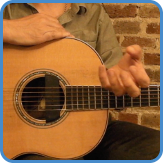 Today we start working on how to play the verse from Babylon by David Gray.

It has a tricky hammer-on and pull-off lick in it. 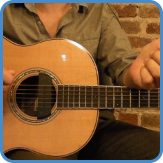 Let’s learn the chorus for Babylon. I’ve got two versions here for you. The first is super simple and a bit boring.

The second example is very chaotic looking and comes from what naturally happened when playing with a singer, having just the one guitar. 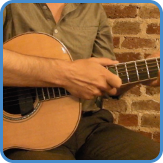 Today we play the complete song. I’ve got a chart here for you, it’s in the key of D.

When you play along with me and the singer, you must fit a capo on fret 1 or you’ll create the worst sound in the world by being a semitone out. 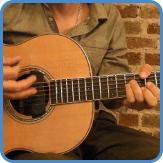 In this step, we build a 2nd guitar part.

Now, when you play with me and the singer, we sound like a band! 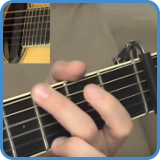 This song has a great maj7 chord lick as the main riff, just like another song in the intermediate course, Fast Car.

The chorus has a repetitive progression that is only varied at the end of each line. Progression tricks like this are very common in songs that become hits. 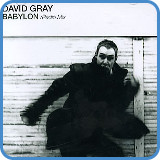 Friday night I’m going nowhere, all the lights are changing green to red
Turning over TV stations, situations running through my head
Well looking back through time, you know it’s clear that I’ve been blind
I’ve been a fool