David Gilmour is an English musician, best known as the lead guitarist, primary singer and one of the main songwriters in the band Pink Floyd.

Known for his melodic ability and fantastic tone, David Gilmour has always been up there with the great British guitar players like Eric Clapton, Jimmy Page, Peter Green, Gary Moore, Jeff Beck, Brian May, and Mark Knopfler.

A genuine collector, David Gilmour is the proud owner of the first Fender Stratocaster ever made, aptly named Number One. It is said to be very sensitive indeed.

Pink Floyd in the studio

As Pink Floyd produce their own records, the process they use is not widely known.

Stories about what goes on are always vague, such as the one of a late night when David Gilmour was mixing Shine On You Crazy Diamond in his home and the former front man of Pink Floyd, Syd Barrett, just walked in.

At first, nobody even recognized him. He spoke for a while with the band and left later that night. None of the band members ever saw him again.

David’s guitar work on Wish You Were Here is immense, his touch is instantly recognizable, as are his note choices.

The genius opening chord of Shine On You Crazy Diamond was actually a mistake, one that they built a whole song from!

Rolling Stones magazine placed Wish You Were Here on their list of Greatest Albums Of All Time. 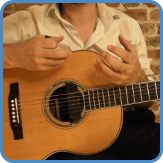 In this first step we look at how to strum the verse/chorus as well as the more complex intro.

To make it sound nice, focus on how you change the dynamics of your strumming hand, maintaining the rhythm.

Go to Wish You Were Here step 1.

Wish You Were Here Step 2 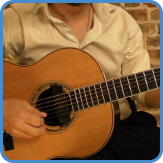 Let’s take a look at those four licks played during the intro in detail.

There is lots to learn from here, the unexpected b9 bends, the call and response between chord VI and I. Let’s learn this note for note.

Go to Wish You Were Here step 2.

Wish You Were Here Step 3 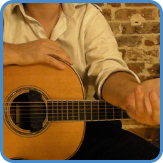 Let’s play the complete song. Simply play along with me and the singer in the video.

Whenever I play the intro chords, play the licks and focus on getting them perfect.

Go to Wish You Were Here step 3.

Wish You Were Here Step 4 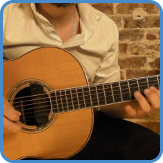 This step is a Minor and Major Pentatonic check-up extravaganza.

Go to Wish You Were Here step 4.

Wish You Were Here Step 5 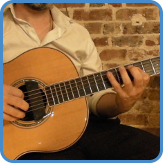 Let’s move those perfect intro licks to all areas of the neck.

This will be a great way to check how well you know those Minor and Major Pentatonic shapes.

Go to Wish You Were Here step 5.

Wish You Were Here Step 6 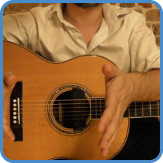 In this step, we work on playing the vocal melodies of the chorus and verses.

We do this in the open position and focus on what intervals are used as well as playing the syncopated rhythm just as written.

Go to Wish You Were Here step 6.

Wish You Were Here Step 7 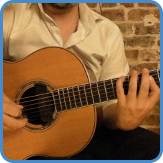 Let’s play the chorus melody in all shapes as this will help us identify intervals in relation to chord shapes.

The ultimate goal is that you can play through all shapes in one go, just like the last TAB loop does, without looking at the TAB.

Go to Wish You Were Here step 7.

Wish You Were Here Step 8 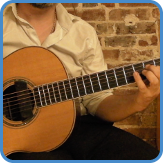 Today we do what we did in the last step but with verse 2’s vocal melody.

Focus on what interval each phrase start and end with and you will be on to great things.

Go to Wish You Were Here step 8. 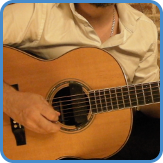 The Stadium meets campfire trick that Wish You Were Here pull off have been attempted by so many bands since. It’s actually difficult to think of one that doesn’t sound a bit like “the original”.

This is not a song to jam and improvise over, so legendary are the licks you simply must learn each and every one of them, note for note.

Go to Wish You Were Here chords and guitar lessons. 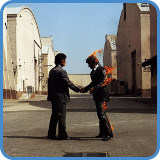 So, so you think you can tell
Heaven from Hell
Blue skies from pain
Can you tell a green field

Go to Wish You Were Here lyrics.