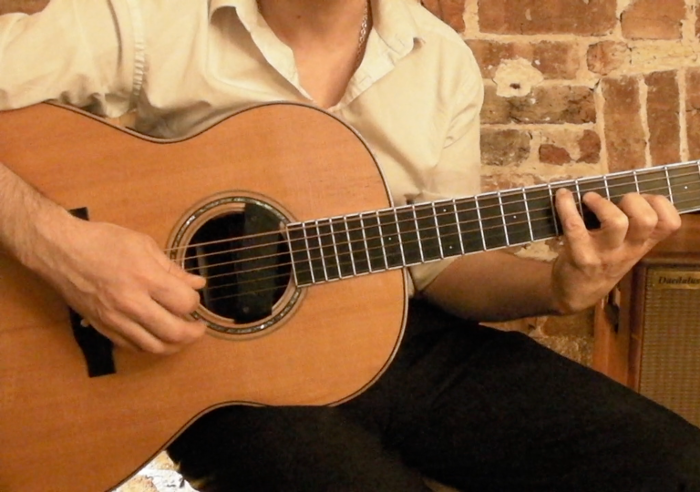 You can learn how to play Angels by Robbie Williams!

My one guitar arrangement is an example of how you could arrange a piano ballad like this, for one acoustic guitar.

For example, the first chord of verse 2, a C shaped E major, uses the low E string and a pattern moving between bass note and chord to imitate a traditional piano part.

Most strangely perhaps, the Badd4, closest relative here would be the sus4, a chord without the 3rd. With a 3rd, it becomes an add4, very unusual.

There are four sections in Angels, each moving to a different area of the key. Let’s take a look at all of them and what chords they use.

The verse mainly focuses on chord I (Ionian).

The bridge creates tension by introducing a bVII chord in a D. This could also be seen as a modal interchange, more about this in the course.

The chorus starts on chord V and takes four bars before we feel a sense of relief, hitting the I chord again.

There is also a modulation for the solo, where we get a Bm, instead of a B or Badd4.

Arranging Angels for one guitar

The original version of Angels was decorated with a massive production, including a full band and string orchestra. To incorporate all this on just one guitar is, of course, impossible. It comes down to picking the most important parts.

A full understanding of the movement of the chords and what the melody does is needed to build the arrangement.

In the advanced acoustic guitar course, we learn the song exactly as it is played in the video lesson but we don’t stop there! We also play the vocal melody, the solo and practice several master exercises for the Ionian mode.

You can learn how to play Angels by Robbie Williams!

I sit and wait, does an angel,
contemplate my fate?
Do they know, the places where we go,
when we’re grey and old?

Robbie Williams is a fifteen-time BRIT Award-winning English pop singer. Williams’ career started as a member of the pop band Take That in 1990.